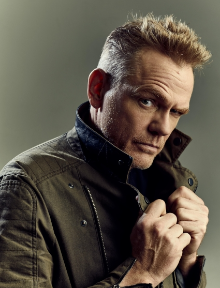 Christopher Titus is a prolific stand-up comedian, writer, actor, and producer. His stand-up work sees him playing to sold-out audiences at clubs and theaters around the country.

As a creator, Titus has sold scripts and ideas to NBC, ABC, FOX, and Comedy Central. His multi-cam half-hour “Titus” premiered to critical and audience acclaim on Fox, earning the show an Emmy Nomination, while Titus himself received a WGA Award Nomination for his writing on the show. Following “Titus,” Chris had a number of straight offer series leads including ABC’s “Big Shots."

Titus has written and starred in eight 90-minute comedy specials, some of which spent months on the Billboard Top Ten Comedy Chart. He is currently performing his ninth 90-minute special, "Stories I Shouldn't Tell," while his most recent hit special, “Amerigeddon,” is available on Amazon. Additionally, Chris has a very successful podcast called "The Armageddon Update/Titus Podcast" with 8-million downloads.

Most recently, Chris wrote, produced, directed, and starred in the feature “Special Unit,” about a team of special needs people who form an undercover police unit.

With a take-no-prisoners wit, years of writing hysterical, poignant comedy both in front of and behind the camera, Chris Titus is a voice unlike any other.

PLEASE NOTE: As of April 22, 2022, The City of Philadelphia's Covid-19 response level is at Level 1: All Clear. Customers are expected to take necessary precautions to protect themselves and others.

Christopher Titus never lies. The truth can be painful, but the truth is really funny. Employing what he calls “hard funny,” Titus has released three ninety-minute comedy albums and starred in four one-hour comedy specials for Comedy Central.

After years of experimentation with dark and personal storytelling, Titus debuted his first one-man show, “Norman Rockwell is Bleeding,” at the Hudson Theater in Los Angeles. It was from this performance that the FOX sitcom “Titus” was born. Titus produced, co-wrote and starred in the show, and it earned him a Writer’s Guild nomination as well as an Emmy nomination. Newsday called him “TV’s most original voice since Seinfeld.”

Christopher Titus has the unique ability to turn dysfunctional family dynamics into a badge of honor. In “Norman Rockwell Is Bleeding,” Titus introduced us to his beer-guzzling, “slightly abusive” father and his manic-depressive mother. Titus’ second one-man show, “The Fifth Annual End of the World Tour,” was released in 2007 to rave reviews. In the show, Titus addresses everything from the Iraq war, raising children in a post-911 world, racism, and pedophilia to his father’s unconventional funeral. Titus’ third show, “Love Is Evol,” delved into tortured relationships, accusations of domestic violence, child custody and plastic surgery. Christopher Titus’ “Neverlution” premiered in 2011 on Comedy Central. In it, Titus declared that it’s time to take our country back, namely from our overindulged children, corrupt politicians, prescription drugs and disconnective technology.

In addition to his one-man shows, Titus shone in 2007 as the lovable character Brody in the primetime ABC series “Big Shots.” He can be seen in the films “Killer Klowns from Outer Space,” “Scar” and “Remarkable Power.”

Christopher Titus is raw, real and most of all, funny. His honesty about his own life gives a voice to the human experience of every person in the audience. To watch one of his shows is to know his world. Everyone walks out of a Christopher Titus show knowing him and loving him.