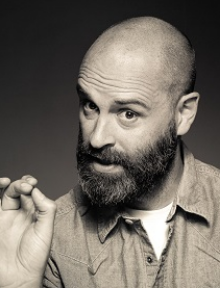 Ted Alexandro has been called "One of the funniest comedians working today," by "Time Out NY" and praised as a comic's comics by Bill Burr, Dave Attell, Todd Barry, Lewis Black, and more. Ted has been performing for over 20 years, has two "Comedy Central Presents" specials, and has appeared on several late-night shows. Ted just wrapped up the final episode of his web comedy series, "Teachers Lounge," which starred many of the biggest names in the industry!


This show is 21+ (18+ with a parent or legal guardian over the age of 30). All minors will be wrist-banded or stamped and no alcohol will be served at the table. All parties must have valid ID to enter the building. Please note, there is a 2 item per person minimum in the showroom. Tickets will be available for pick up at the box office prior to the show (they are generally available 1.5-2 hrs prior to showtime.)

Ted Alexandro has been a comedian for twenty years. Time Out NY called Ted “One of the funniest comedians working today.”

Ted has performed internationally in Jordan, Egypt, Kuwait, Hong Kong, South Korea, Singapore, Jakarta, England, Holland, Israel, South Africa and Qatar, and has been very active in the Occupy Wall Street movement and is one of the founders of Occupy Astoria Long Island City.

Ted has appeared on the television shows “Oz”, “Dr. Katz” and “Louie” as well as collaborating with Hollis James on such videos as “Kiss Our American Ass” and “Nobody’s Dummy”, which can be found on Ted’sYouTube channel.

Ted and Hollis are currently creating the webseries “Teacher’s Lounge.”